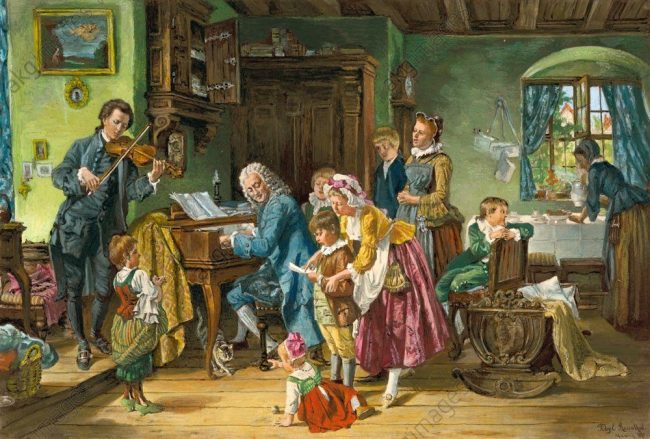 Despite dropping two items from the advertised program, the ACO provided a full and satisfying Baroque concert seasoned with more recent composers’ compositions. I can only think they got too carried away with the programming possibilities and realised it wasn’t all going to fit within the usual concert format.

The concert began with an Overture by JS Bach’s 3rd cousin, which was a fairly predictable piece from the time, but delivered in expert hands. Next came a rather odd modern sounding Sonata by JS’s great uncle Heinrich, possibly the earliest work in the program. It was an astringent, discordant and dark piece that seemed out of context.

Mezzo-soprano Anna Dowsley then graced the stage, with a powerful presence,  for JC Bach’s (Heinrich’s son) Ciacona, a secular song written to celebrate a wedding. And at  last we get to the master himself (Johann Sebastian) with a church sonata. Anna’s deep rich tone was clear and powerful throughout her entire range.

And before interval we enjoyed all over again the JS Bach concerto for 2 violins. I’m sure Tognetti and Rathbone have performed this masterpiece many times, yet they were able to bring a freshness to the work.

For this reviewer, after interval was when the concert became really interesting, opening with Sofia Gubaidulina’s (1931- ) Reflections on the Theme of B_A_C_H. Suddenly Heinrich’s Sonata made sense within the program, as the similarities between the two pieces separated by 400 years  were striking. The darkness, the dissonance and the irregularity of the rhythms spanned the centuries. However, after the intermission it was difficult to maintain in our minds the connections between the two  works, as I’m sure we were meant to. It appeared more as a distant echo.

Ich habe genug is possibly JS Bach’s best loved church cantata, composed when he was churning out one a week for each Sunday of the Church calendar. Anna Dowsley again delivered a beautiful and compelling rendition of an aria from the larger work.

Throughout the program the rhythm section (basso-continuo) kept the band on track, and now it was their turn to take the spotlight. Firstly harpsichordist and forte-pianist, Erin Helyard gave us a slow movement of a Mozart Piano Concerto dedicated to JC Bach (son of JS). And to close the show Tipi Valve performed the Cello Concerto in  A major by CPE Bach. Suddenly we were no longer in the Baroque sound world, but clearly in the Classical. We had arrived at the end of our journey and musicology lesson.

Overall the concert was performed with the necessary clarity and precision we have come to expect from the ACO. However this, in my opinion, wasn’t their finest piece of programming. We have become used to classical concerts with disparate items programmed side by side, where we are asked to discover the connections between them. This concert did that, but at the end it was a chronological exploration of 4 generations of Bachs, with a few asides thrown in. Having said that, nothing diminishes the power, clarity and musicality of the ACO, who always deliver the musical goods.