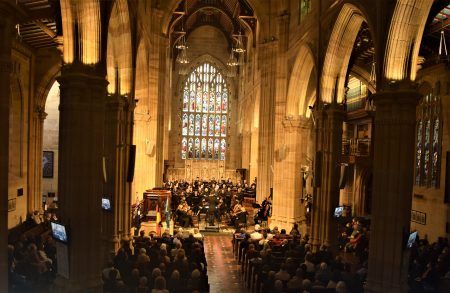 St Andrews Cathedral, if you’ve never been inside as I hadn’t, is a pretty impressive building in the heart of Sydney, with its sandstone columns, high ceiling, beautiful stained glass windows and heavily carved wooden pews. The wow factor is working overtime before the choir even appears, but the capacity crowd has gathered to hear the sacred works of Peteris Vasks, not to ogle the architecture.

Sydney Philharmonia Choirs Artistic and Musical Director, Brett Weymark, has put together an interesting program that intersperses shorter sacred works by Vasks with contemporary Australian compositions in what has become the trend in classical music programming over the last few decades.

As is their habit these days, the program opens with Deborah Cheetham and Matthew Doyle’s evocative Welcome to Country, Tarimi nulay – Long time living here. Sung in the Gadigal language the work opens with the hiss of the Rainbow serpent, then morphs seamlessly into a celebration of country. We feel proud to be welcomed with such vocal power.

With the formalities out of the way, the Chamber Singers and the Sydney Philharmonia String Ensemble bring us to the reason we are here and the first work in the  program by Vasks, Pater Noster (Our Father). Composed in 1991, the harmonies are slowly evolving in a style reminiscent of Henryk Gorecki. And this is why I love contemporary choral music. Slowly the dissonance builds without us realising, until we are aware we are in the centre of harmonic chaos, and slowly the hint of a major triad appears through the purple mist in the distance revealing itself in its simple glory, Amen. 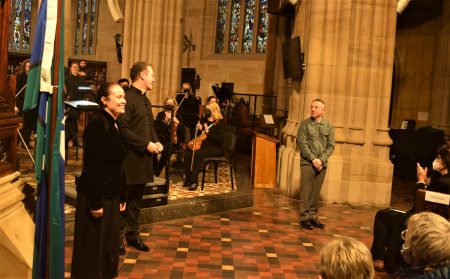 Local composer Maria Lopes is next with her composition, My Life Flows On, and Stuart Greenbaum’s The Night that the Museum Burned. The two works are very different from each other even though they were composed in a similar time and place. If I was to compare them to music for cinema, the Lopes work would be a safe family drama redolent with fields of ripe wheat and flowing linen dresses. Greenbaum, by contrast throws us immediately into a thriller suspense story with dark deserted streets and the looming threat lurking in the shadows. My Life Flows On, while starting well, descends eventually into muddy brown harmonies that seem a bit lost in their direction and purpose. The Night that the Museum Burned meanwhile captures us and takes along for the dramatic adventure with dynamics that are astounding as they are pleasing, and powerful terrifying chords of complex dissonance. The Chamber Singers certainly brought out the best of both works to their credit, however the String Ensemble had to struggle to match their intensity. Was that due to the acoustic or the small forces brought to bear?

To take us to the interval we had Vasks’ 1996 composition Donna Nobis Pacem. It is based on three very simple words, “Grant us Peace”, and as Vasks says “these words are so all encompassing.” Again the Chamber Singers realised the simplicity and power of Vasks’ music, the tension building until we finally settle in Peace. 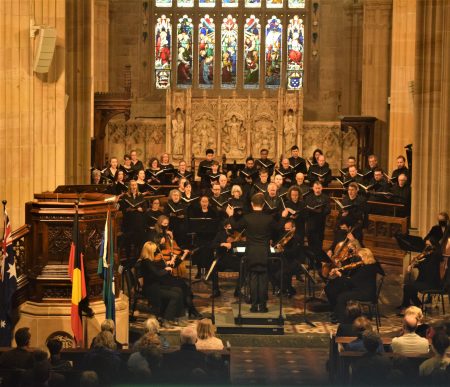 This work, along with the larger work, Missa, which filled the second half of the program, was scored for choir and organ or string orchestra. My feeling was the string orchestra just didn’t have the power to support the choir, the low notes of the double bass crying out for reinforcement from a large pipe on the church organ, but the Sydney Philharmonia String Ensemble worked hard to match the power of the Choir, not always succeeding. My impression of this setting of the Mass was one of a lack of unity. The separate movements seemed a disparate pastiche of styles from Vasks’ dissonant dark harmonies, to sunnier and brighter melodies with little connecting the changes apart from the liturgical rite.

Overall, a very satisfying concert in a truly remarkable venue, with many surprises along the way. Let’s hope there is more of this to come from Brett Weymark and the Sydney Philharmonia Choirs, and if the rest of the 2022 season is anything to go by, we are indeed in safe hands.