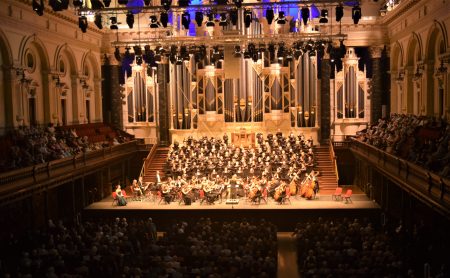 The proceedings began with an apology. “Artistic and Music Director, Brett Weymark is unable to lead this afternoon’s performance because…” yes, you guessed it, the usual disruptive reason we have become so familiar with over the last few years.

However his more than capable Associate, Dr. Elizabeth Scott, took to the podium. Maybe she hadn’t  had sufficient rehearsal time with the orchestra, but after the first few numbers she brought the choir, soloists and orchestra together as a unified powerful ensemble.

The packed Town Hall hushed in expectation as she raised her baton, but what they were hearing wasn’t Mozart but an entirely different sound world. An ancient world of myth and mystery, and the evocation of the Rainbow Serpent, in Deborah Cheetham and Matthew Doyle’s Tarimi Nulay – Long Time Living Here, an acknowledgement of Country. But this was but a prologue to what was to come.

Next we heard the heavenly disembodied sound of the choir singing an ancient plainchant, Christus factus est, (usually sung on Holy Thursday) from the lobby at the back of the Town Hall, reminding us that what we are about to experience is sacred church music. The focus then moved to the stage with the mighty organ as a backdrop (seen but not heard).

In a recent interview, Brett Weymark told me the inspiration for Mozart: Requiem & Revelation came from Romeo Castellucci’s Requiem at the 2020 Adelaide Festival. As Mozart did not complete the work before his death in 1791, various composers over the years (starting with Mozart’s pupil Sussmayr) have attempted to produce a finished work. Weymark collaborated with composer Jessica Wells in this version to intersperse the movements of Mozart’s Requiem with other Mozart compositions and arrangements as well as an original piece by Wells to complete the narrative. 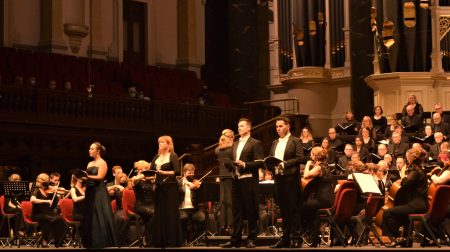 What we got was not a pastiche, but somehow a unified complete work. The drama of the Requiem (think Dies Irae and Rex Tremendae) was highlighted and contrasted beautifully with a sublime rendition of Laudate Dominum, with soloist, soprano Chloe Lankshear. Also worth noting was baritone, David Greco, particularly as soloist in Tuba Mirum. 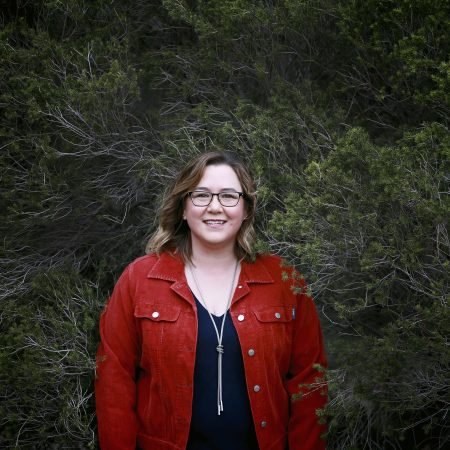 Two added movements that didn’t blend seamlessly with the original were the Two Sacred Hymns, K.343, (because the German text stood out from the surrounding Latin), and the work by Jessica Wells, Dolor ultim  melodi (Grief of the Last Song). Mozart had left only a 16 bar sketch for an Amen fugue. This was performed and stopped suddenly at it’s end. After a significant pause Wells’s work ushered in a more modern sound world that somehow related to the rest of the Requiem.

After a 90 minute journey of exquisite choral and instrumental rapture, when you thought you couldn’t be amazed any more, the final act took us to a whole new level of ecstasy. During a hummed reprise of Miserere mei, Deus, a section of the choir left the stage and disappeared into the hallways of the Town Hall. The lights dimmed and we heard In Paradisium, seemingly in a round with each delayed iteration coming from a different doorway echoing down the sides of the hall and disappearing at the back. A truly remarkable effect that brought an extended thunderous applause from the appreciative crowd. We had witnessed something truly exceptional, something to treasure for a lifetime.