Since the start of the war in Syria 10 years ago, the lives of Syrian people have been under threat. Back in 2011, the situation quickly shifted from localised protests to a full-scale war, leading to a devastating humanitarian situation that persists a decade later.

Over the course of 10 years,12 million Syrians half the pre-conflict population – have been forced to flee the conflict and leave their homes behind, often multiple times, making it the biggest displacement crisis of this century. Many of them are still displaced today.

A significant part of Syria’s infrastructure has also been destroyed. Notably, Syria’s relatively functional health system has been devastated. Hundreds of medical facilities have been bombed , large numbers of medical staff have been killed or have fled, and there are still desperate shortages of medical supplies in many parts of the country. Today, the medical needs of the Syrian people are huge.

Médecins Sans Frontières/Doctors Without Borders (MSF) has been responding to the crisis in Syria since the start of the war. We have been providing support to people in need across different areas of the country: from donating medical supplies, to setting up hospitals and clinics, to providing remote support to medical facilities and networks of doctors in areas that MSF could not access directly. Today, MSF is providing support to Syrians within Syria as well as in various neighbouring countries that host Syrian refugees.

Syrian lives under threat for 10 years

In 2011, localised protests in Syria shifted into a full-scale war. Ten years on, the conflict continues and needs in the country are huge. Almost 12 million Syrians—half the pre-war population—have been displaced. Médecins Sans Frontières has provided medical humanitarian aid throughout the decade, witnessing the impact of the conflict on Syrians struggling to survive.

May 2012: Syrians seek safety in Domeez refugee camp in Iraqi Kuridstan, one of the locations in neighbouring countries where Médecins Sans Frontières sets up activities to assist people fleeing. Our teams in Syria open four makeshift medical facilities in the country’s north, and we deliver tons of medicines and medical supplies to health centres. 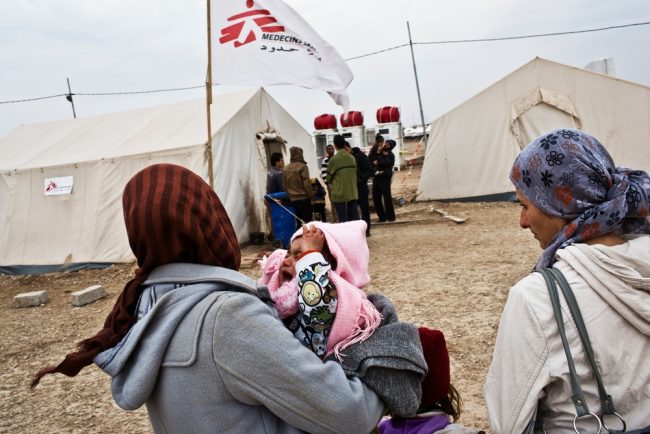 A Syrian refugee carries her child to the MSF medical clinic at the Domeez camp in northwest Iraqi Kurdistan, January 25, 2013. Approximately 32,000 people who have fled conflict and economic insecurity in Syria live in the camp. An average of 450 patients a day are seen at the 24-hour clinic, which is staffed by six doctors and ten nurses, all of whom are refugees. Common ailments include respiratory infections and diarrhea. Camp residents have been struck by outbreaks of hepatitis A and measles, which have been brought under control by MSF and the Iraqi Kurdish Department of Health. © Michael Goldfarb/MSF 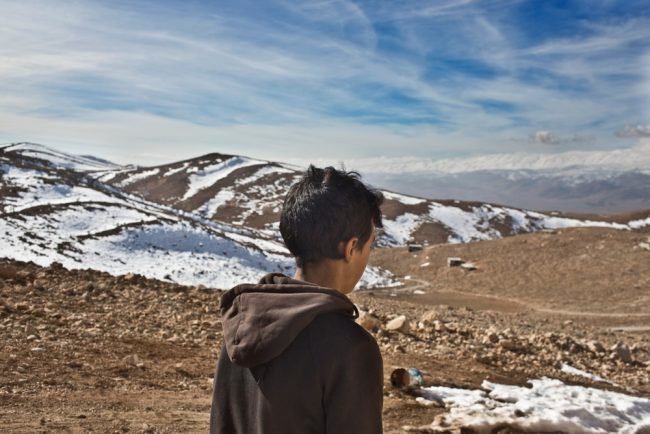 A young Syrian refugee looks out over the snow-swept mountains outside a half-built mosque serving has his family’s home near the town of Arsal in Lebanon’s Bekaa Valley, January 23, 2013. The family chose to live in the mountain-top mosque for fear of spies in town, despite the added difficulty in obtaining food and other essentials. © Michael Goldfarb/MSF 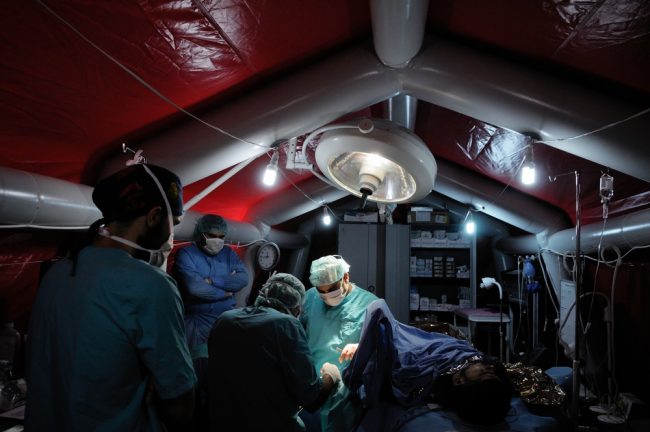 An inflatable operating theatre is erected inside this MSF makeshift hospital in Syria (a converted chicken farm) as it is an efficient way to maintain a sterile environment. Surgeon Steve Rubin operating. © Robin Meldrum/MSF 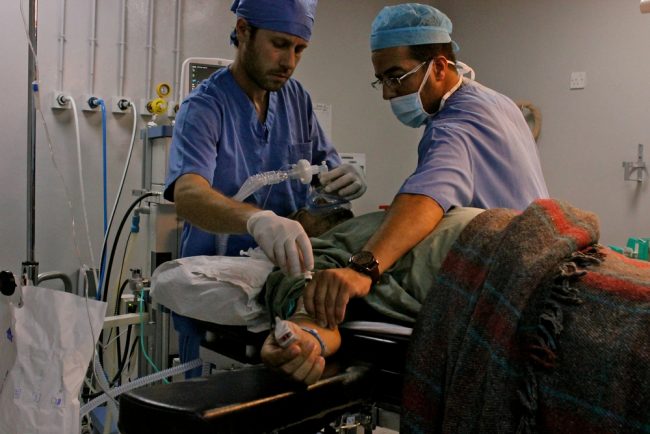 MSF doctors check the pulse of a patient after anaesthetising him, before operating on him. MSF’s Emergency Trauma Surgical Project in Ramtha Governmental Hospital opened in September 2013. It has treated hundreds of war wounded coming from Syria. © Diala Ghassan/MSF 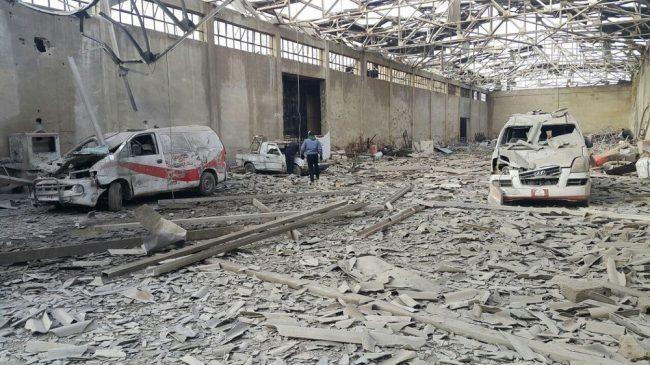 The last two functional ambulances in Al-Marj neighbourhood (in the East Ghouta besieged area near Damascus) were destroyed beyond repair in an aerial bomb attack on Monday 05 December 2016. They were parked in the hospital’s warehouse/garage, very near to the makeshift hospital’s location. Two hospital cars, used to transporting supplies and medical personnel, were also destroyed in the blast. The lack of ambulances will have an impact on the ability to quickly treat wounded when there is bombing or shelling in the area, but above all it will affect the capacity to refer the most sick patients to larger secondary referral hospitals. The makeshift hospital in Al-Marj is not equipped for complex or long-term in-patient hospital care, and this could have a big impact on the ability to refer patients for appropriate secondary care. © MSF 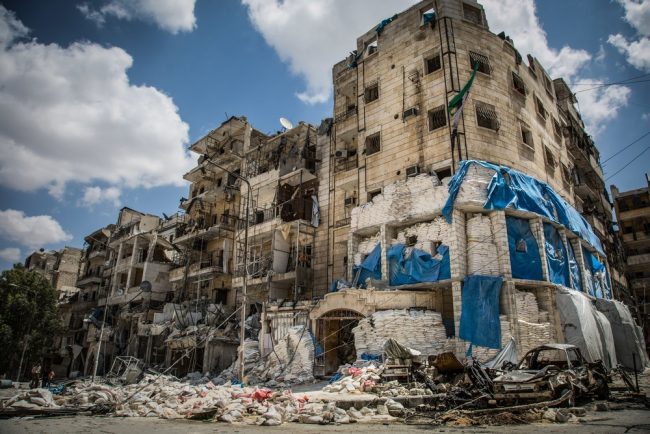 A hospital in east Aleppo is patched up with sandbags after it was hit by airstrikes in April 2016, killing one doctor and injuring several nurses. © Karam Almasri 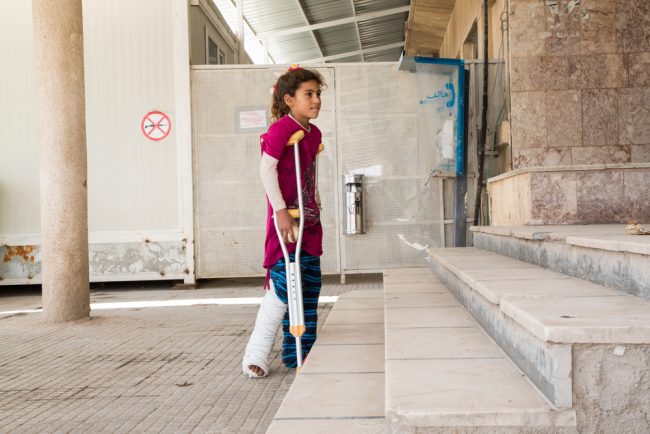 Humaid, 45 years old, is from Dhiban, in Deir ez-Zor. Five of his daughters (Sedar (4 years old), Dumua (5), Butul (6), Arimas (9) and Lamis (13)) were on the rooftop of the house when they were severely injured by a booby-trap. Sedar, the youngest, has been partially amputated of both legs, and Lamis, the eldest, of one leg.

“We fled Dhiban because of the clashes. Once the situation calmed down I went back by myself to check the house and did not see any suspicious device, so I brought my family as well.” The accident that almost killed the girls happened two month later. “The girls had never seen a mine before, how could a child know about a mine? They put the mines in the fridge, in the door handle, under the carpet, inside the Quran. The hospital is full of people who have amputated legs. What was the fault of the children? They are not part of the conflict. This is not a war, it’s a war against human.” 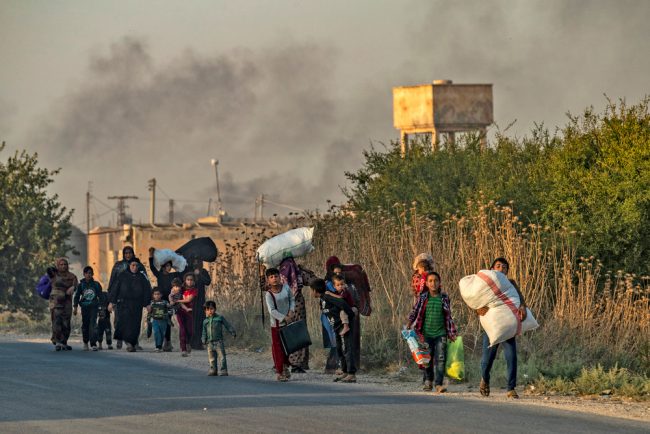 2019-10-09 19:01:51 Syrian Arab and Kurdish civilians flee with their belongings amid Turkish bombardment on Syria’s northeastern town of Ras al-Ain in the Hasakeh province along the Turkish border on October 9, 2019. Turkey launched a broad assault on Kurdish-controlled areas in northeastern Syria today, with intensive bombardment paving the way for an invasion made possible by the withdrawal of US troops.
© Delil SOULEIMAN / AFP 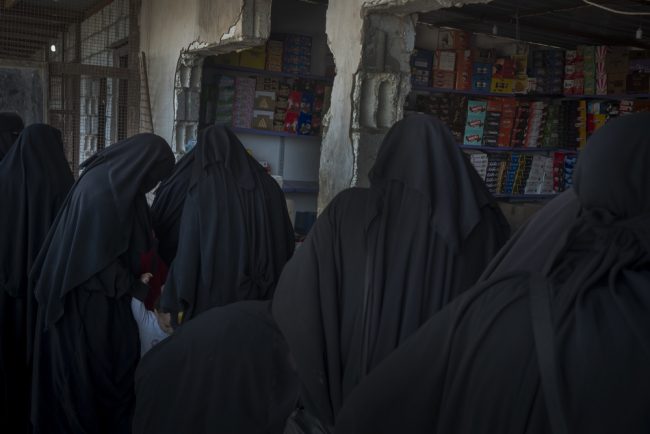 In the increasingly unsafe environment of Al Hol camp, northeast Syria, 30 people including a Médecins Sans Frontières staff member are killed between January and March. COVID-19 and the economic crisis add further strain to the lives of Syrians. © Ricardo Garcia Vilanova

What: Crisis in Syria

To Find Out More & To Make A Difference Now Click Here