An attention-grabbing jazz performance to kick off a Friday morning? Intriguing.

In a small cozy venue similar to a living room, Lisa Odour-Noah delivers a show that ultimately had everybody in the room dancing and singing along. Joined by bassist Sedar Malaki Oddenyo, the pair led a captivating environment that resulted in many comments on how it was the perfect way to start a Friday morning.

With only around thirty people in the audience, Odour-Noah made sure to find ways to draw her audience in. From the start of the show, she was able to draw the audience in with a seemingly emotional rendition of a soothing jazz cover. She followed this initial song with an explanation of how she was able to truly express her feeling towards it through her voice. 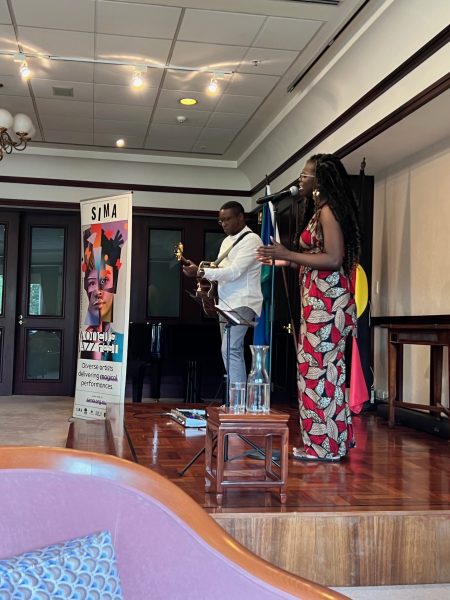 While Oddenyo carried on with the instrumentals of the previous song, Odour-Noah explained how she felt the song resembled the feelings surrounding rain. She goes on to say how when it rains it can be a terrifying thing but the song reminds her though it is unpredictable, “the beauty of the rain is that it always refreshes”. Her commentary may have been the selling factor for the audience. Odour-Noah had the ability to express the message of a song that most people in the audience wouldn’t be able to fully understand, due to it being written in Swahili, through her tone and visible emotions. These expressions were the beginning hints that this show would not just be one of a laid-back performance but something truly engaging that would leave everyone wanting to participate in the rest of the show.

For the last few songs, Odour-Noah encouraged everyone in the room to stand up and follow her lead. She started off by having everyone sing parts of the songs with her and led into directing everyone to join her in swaying to the song. Nearly the entire room of people had joined her. It all created a lively environment that had everyone leaving the venue with smiles on their faces ready to get into the rest of their Friday.